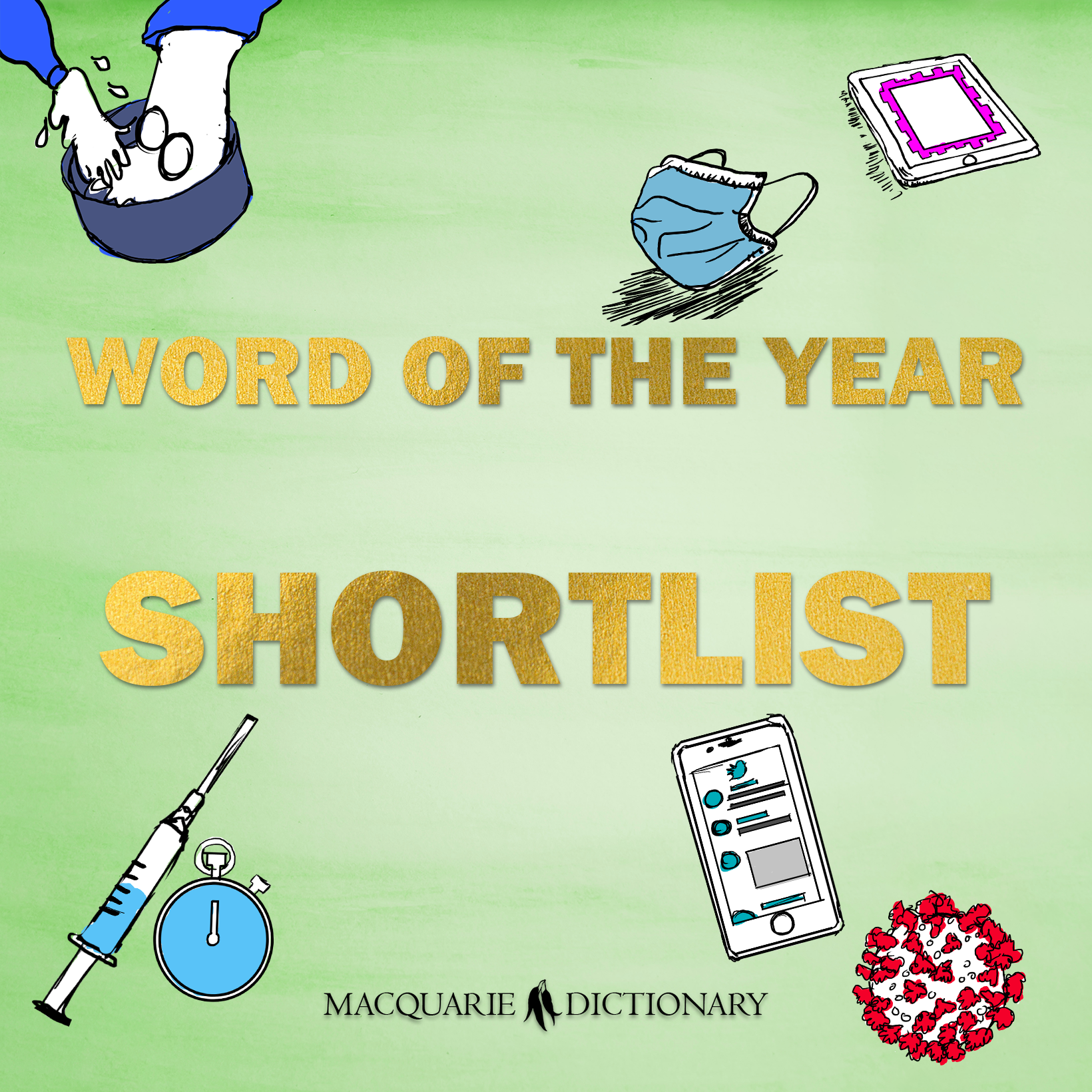 You can review the words and definitions below. Find out which word became the Word of the Year 2021 here.

You can also view the entire longlist here.

noun Colloquial a nasopharyngeal swab, as used for COVID-19 testing.

noun a strategy designed to encourage customers to shop at bricks-and-mortar stores rather than online, as by providing personalised service, pleasant surroundings, etc.

noun adaptive clothing in the form of a jumpsuit elasticised at the waist, with a zip at the back to prevent the wearer from undressing, especially as designed for people living with dementia, Alzheimer's disease, etc.

noun the practice of ingesting powdered pre-workout supplements or protein powder without mixing with water or milk as directed.

noun a cake which is prepared by combining the ingredients directly in the cake tin or dish in which it is to be baked.

verb (t) Colloquial to betray (someone) openly, without subterfuge.

verb (t) Internet to link oneself to (a site on a social network) even though one dislikes or disagrees with the content being shared.

noun the misleading marketing of a product sourced from animals, deceptively giving the impression that the animals have been treated humanely.

noun tourism to locations with endangered landscapes or geological features, or which are habitats for endangered species.

noun Colloquial a person who steals parcels which have been left outside a home by a deliverer.

noun the stress experienced by the driver of an electric vehicle when they are unsure of reaching their destination or a recharging point before the vehicle's battery runs out of power.

noun an increase in mental health problems and domestic and family violence attributed to living with the stresses and restrictions of the COVID-19 pandemic.

adjective having an interest in reducing one's consumption of alcohol or in giving it up altogether.

noun Colloquial (humorous) the rollout of the COVID-19 vaccination program in Australia, with reference to the perceived lack of speed.

noun the social environments where people spend time away from home or work.

verb (t) 1.  to rebuke (a person) for having beliefs that are perceived to be accepting of prejudice or discrimination.

–noun 2.  a person who issues such rebukes.

A weak list of candidates, mostly contrived neologisms that are unlikely to achieve common usage or survive beyond next year.

I would have thought a Word of the Year would have achieved rather more frequent and widespread use than most of those appearing on the shortlist. Most fall into the try-hard category, creating a word for the sake of it rather than filling a gap in the vocabulary. Others are too narrow in their application, such as dump cake. How long will any of these last?

I agree. Most of the words are pretty obscure. 'Delta' has to be the out-and-out winner. Remember when Oxford Dictionaries picked 'selfie' as the word of the year - that was a stayer and a true winner. An all-too-clever but passing neologism is no contender for me.

tourism to locations with endangered landscapes or geological features, or which are habitats for endangered species - the word that has a god chance to be nominated