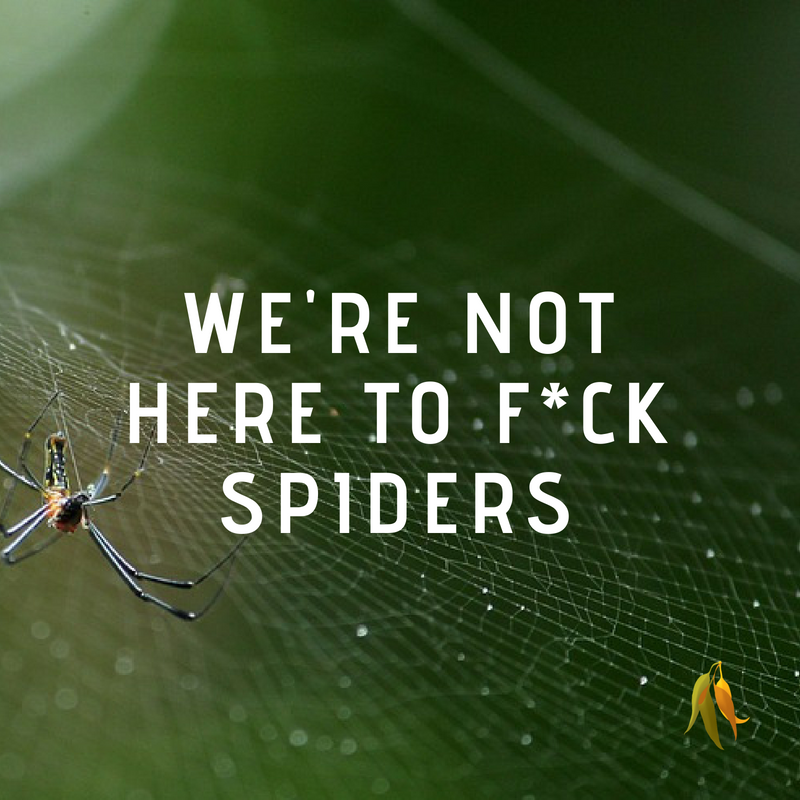 Update: Click here to read why we're still not here to f*ck spiders.

A couple of months ago I came across a phrase I hadn’t heard before. This isn’t unusual in itself but this was a phrase which is apparently in fairly common use in Australian slang and has been around for a number of years.

Crude Australian sarcasm at its bluntest, ‘... not here to fuck spiders’.

I also heard it in the least expected place. I was happily settled in for the night watching the Graham Norton Show (UK) with a glass of wine. Margot Robbie was one of the guests which was an added bonus, and after a snake story (which had my feet off the floor and feeling sorry for her mum), out she rolled with this little purler.

Shock factor aside, with the added ludicrousness of anyone wanting to do anything with spiders, the phrase had me laughing my head off. As an editor at the dictionary it’s part of my job to investigate words and phrases regardless of their nature. I do have to admit, it’s much more interesting researching the usage of these types of lexical items than whether the scientific name of a certain plant species has changed.

If I was ever in doubt of the phrase’s currency, an Australian movie shot in 2017 and due to premiere in festivals in 2020 titled We’re Not Here to Fuck Spiders has clinched it.

I would have thought there were many more variations in the vein of the spider, caterpillar and stamp, but these appear to be it. We would be interested to hear of any others.

The origin of this phrase might not be Australian. In Ian Fleming’s first James Bond novel, Casino Royale (1953), Bond says to a barman in French: “Mais n'enculons pas des mooches.” This can be translated as “But let’s not fuck flies”. Bond used it to mean ‘let’s not waste time splitting hairs over the type of vodka used in this martini’. Whether it’s an authentic French saying, or something Fleming made up or translated from British slang, I don’t know.

I first heard this one as a uni student in Brisbane, in the late 1990s. We were at a beer, cricket and barbeque afternoon party (or 'piss-up', as we called it).

Someone enquired about the sister of one of the young men.
He replied that his sister was in France.

I asked what the sister was doing in France. I was secretly hoping to obtain sophisticated knowledge of European culture, adventure and romance.

The brother looked directly at me, raised one bored eyebrow and said, 'She's f*cking spiders, mate.'

You wrote the possible French origin of “we’re not here to fuck spiders”.
The French spelling is “mouches” not “mooches”.
Brian Porter

I'm extremely chuffed that our little film has found its way onto the Macquarie Dictionary blog (is there any greater proof of legitimacy?), but I do need to make a correction. We shot the film in 2017, but I have only just finished post production, so it is due to premier in festivals later this year.

Duly noted, thank you for the correction. We've updated now.