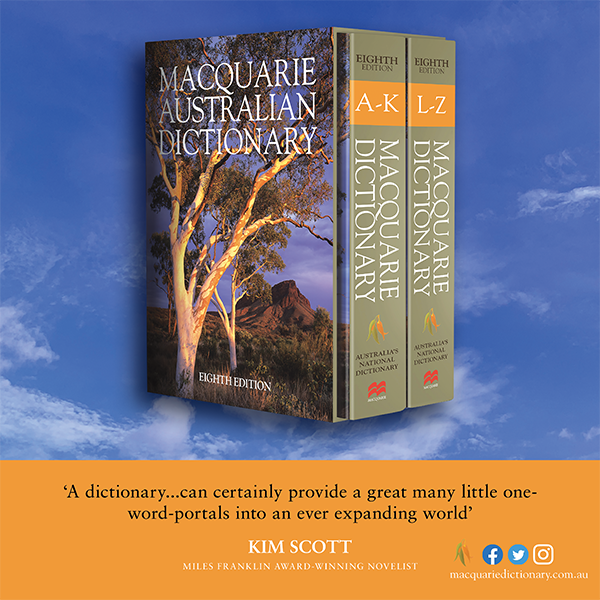 Each new edition of the Macquarie Dictionary features a foreword written by an esteemed Australian writer. For the Eighth Edition, we were honoured to welcome Kim Scott, author Taboo and the Miles Franklin Award winning That Deadman Dance. The words below represent a selection of those that stood out for Kim, which in turn represent just a fraction of the 3500 new entries included in the Macquarie Dictionary Eighth Edition.

Kim’s foreword focuses on some of the Indigenous words included in the Eighth Edition. Kim notes that many of these words would once have been labelled simply as 'Aboriginal' but have since been updated with more understanding of their place within Indigenous culture and language groups. Take for example Ngangkari, from the Pitjantjatjara language, one of many Indigenous words included in the Macquarie Dictionary Eighth Edition.

Kim Scott’s other word selections are often humorous or food related. Each of the six words below reflects changes to the way Australian English is used by the public. To read the rest, order your copy of the Macquarie Dictionary Eighth Edition and read the foreword for yourself.

noun Colloquial a psychologist or psychiatrist.

noun Colloquial the practice adopted by some people, especially on social media, of exaggerating claims about their emotional problems to generate sympathy.

noun a spiralised strand of zucchini, sometimes used as a substitute for pasta.