The Macquarie Dictionary Word of the Decade shortlist 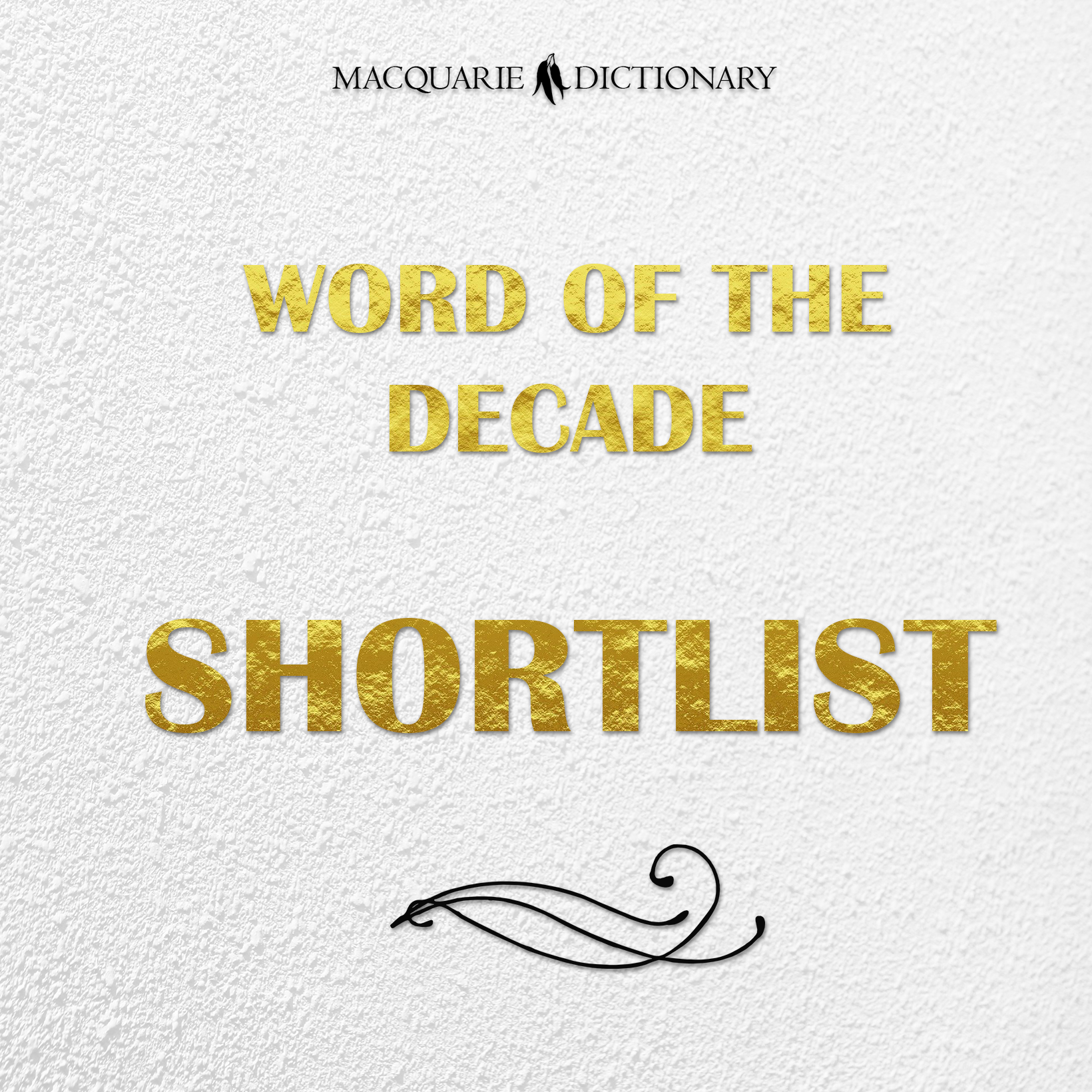 The Macquarie Dictionary Word of the Decade is a celebration of Australian English. The shortlist below features the good, the bad, and the sometimes baffling winners of the last ten Word of the Year competitions as selected by our Committee and as voted for by you.

Check out the shortlist below to see how our language has changed in the past ten years. Which words stuck with you? Which words have fallen out of favour with you? There are twenty-one words in total, so take your time and don't forget to vote for your Word of the Decade!

noun a swimsuit designed for Muslim women, comprising leggings and a tunic top with a hood.

noun the attitudes within a community which call for or bring about the withdrawal of support from a public figure, such as cancellation of an acting role, a ban on playing an artist's music, removal from social media, etc., usually in response to an accusation of a socially unacceptable action or comment.

noun Colloquial (derogatory) a person who refuses to follow health advice aimed at halting the spread of COVID-19, as by not social distancing, taking part in large gatherings, etc., as well as buying large amounts of perceived staples, especially toilet paper.

noun Colloquial the practice of continuing to read news feeds online or on social media, despite the fact that the news is predominantly negative and often upsetting.

plural noun disinformation and hoaxes published on websites for political purposes or to drive web traffic, the incorrect information being passed along by social media.

noun a problem that relates to the affluent lifestyle associated with the First World, that would never arise in the poverty-stricken circumstances of the Third World, as having to settle for plunger coffee when one's espresso machine is not functioning.

noun (in oil and gas mining) a process by which fractures are made in rock by the application under pressure of chemically treated water mixed with sand to natural or man-made openings in order to gain access to oil or gas supplies, considered by some to be associated with groundwater contamination; fracking.

noun (plural framilies) Colloquial a group of people who are not related by blood but who constitute an intimate network.

noun a person who craves information, especially one who takes advantage of their ready access to it on digital devices.

noun Colloquial (derogatory) (a term used predominantly to refer to a middle-class white woman, often of generation X, who is regarded as having an entitled, condescending and often racist attitude.)

verb Colloquial (humorous) (of a man) to explain (something) to a woman, in a way that is patronising because it assumes that a woman will be ignorant of the subject matter.

adjective of or relating to an accusation of sexual harassment or sexual assault, especially as having occurred at some time in the past and which has since remained undisclosed.

noun a person who is initially viewed positively by the media but is then discovered to have something questionable about them which causes a sharp decline in their popularity.

noun a loose-fitting one-piece suit, usually of a stretch fabric, gathered at the wrists and ankles and loose at the crotch.

noun a syndrome characterised by constant anxiety in relation to one's mobile phone and an obsessional conviction that the phone has vibrated in response to an incoming call when in fact it has not.

noun a debt owed to the government by a present or past welfare recipient, arising from an overpayment of benefits calculated by an automated process which compares the recipient's income as stated by them to the government with their income as recorded by the taxation authority, a notice of discrepancy being automatically generated.

noun a serving in a restaurant designed as multiple small portions so that several diners can share the same dish.

adjective intended for disposal after only one use: single-use plastic bag; single-use cup.

Mansplain gets my vote. Men still think that the little woman needs things spelt out to her, preferably in words of one syllable. Probably because that's the only ones he knows.

Captain’s call as it reflects the anti democratic age we live in which is ignored by most people who pretend it does not exist.

It is very difficult to vote for a ‘word’ of the decade when many of the options are clearly two words. Perhaps the category could be either changed to ‘term of the decade/year’ or be strict with the category title as a single word.

How many will endure the test of time? Several are for now but will they be in regular use next year or next decade?

Why is 'mansplain' humorous and Karen 'derogatory'? A world of sexism in that distinction. I'll second Janise's vote for the derogatory 'mansplain' as one word that will likely outlast the decade. If it proves redundant in the 2020s, hallelujah!

I'll vote for mansplain as a word that spans the decade and will probably, sadly, still be a useful word for decades to come. NB as a woman with a good SOH, I don't consider it humorous. It's more of a constant, tedious challenge for women to have to deal with on an annoyingly repetitive basis.