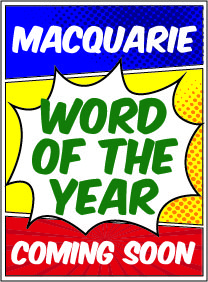 Last year the Committee chose mansplain but the people chose share plate. What will this year's winners be?

The Committee members this year are:

Stay tuned for more Word of the Year news coming in January 2016. In the meantime, have a look at words from previous years and keep an eye out for the #macqwoty hashtag.

Update 12/01/2016: Michael Spence is no longer able to attend the committee meeting. Nick Enfield will now be joining.