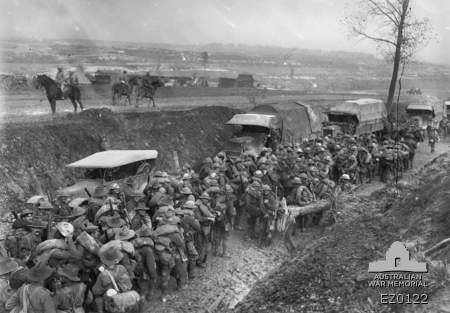 The first thing to attack in the army, as in any institution, was the food. There was the official iron rations, but there was also the joke Anzac wafer (modelled on vanilla wafer) described as a hard biscuit, ‘one of the most durable materials used in the war’ Digger Dialects. Anzac stew was made with an urn of hot water and one bacon rind. Flybog was the name for jam, aptly since flies were the scourge of Gallipoli and got into anything greasy or sticky. Axle-grease was the word for butter. Food can be used to familiarise something else, so came the reference a shell burst as a cream puff.

Humour comes also in sharing words and phrases borrowed from other languages with which soldiers suddenly come into contact. These travel through the soldier’s lexicon whatever their starting point. From French came such expressions as alley ‘to go’ from allez, compree ‘understand’ from compris, plonk ‘cheap wine’ from vin blanc, san fairy Ann ‘no matter’ from ça ne fait rien, and toot-sweet ‘immediately’ from tout de suite. From Arabic there was bint ‘a woman’, imshi ‘to go away’, magnoon ‘crazy, idiotic’, maleesh ‘no matter’, and the Wazza ‘the red light district in Cairo’.

War takes its inevitable toll on one’s health. The Aussie was the equivalent of the British Blighty – that is, the wound that was serious enough to have you packed off home. Humour also comes through in the various uses of king meaning ‘expert’, one of which was iodine king for a regimental medical officer. The iodine lancers were members of the Australian Army Nursing Service, a nickname which captured neatly the general use of iodine for treatment and the prevalence of boils needing to be lanced. (The kiwi king was the soldier who polished his boots and leather carefully, from the Kiwi boot polish brand.)