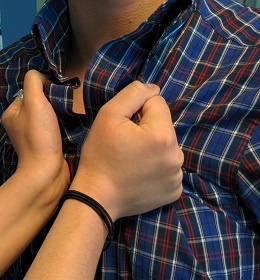 The discussions about shirtfronting still go on, fuelled by the fact that the AND (Oxford Dictionary’s Australian branch) has chosen it as their Word of the Year. But it seems to me that there is still a lot of confusion. This is how I see it.

Since men have been wearing shirts, they have had this habit of grabbing an opponent’s shirt front and twisting it to express their displeasure. It seems to be the thing to do when you are indignant and feel that you have cause to teach the other man a lesson. Common assault would be fisticuffs or hitting someone over the head. The shirt technique is reserved for teaching someone a lesson, as in this extract from a short story published in the Argus in 1946.

'…Bo says. "I don't have to do what you tell me," then he is hanging in the air like a piece of washing that is left out on the line for a few nights. He doesn't squeak again because he can't on account of Norm's got him by the shirtfront and is twisting it hard. Bo's eyes are popping out like lobsters', and he looks as though he wants to say something, so Norm eases up a bit.

Norm drops him then and the boys let their breath go, and it is like a wind blowing down a chimney. It is good to have your boots to lace because then you don't have to look at the others. It is surprising how many boots have to be done up.'

The figurative use of this word was popular, it seems, in Canberra in the early 1990s, but it does seem to have been a political buzzword, not really picked up in mainstream colloquialism. A lot of shirtfronting went on in federal politics at that point and it wasn’t just men to men, but also men to women. (Red Symons pointed out that this should have been blouse-fronting.)

I don’t believe that this figurative use was a development from the Aussie Rules use of the word which was part of the jargon of the sport and so limited in use. There is no sense that the political use of the 1990s had that level of violence behind it but rather a general sense of indignant confrontation.

So Abbott’s use of the word is probably a revival of the 1990s. Because the word had limited use in the political sphere in Australia, it puzzled most of us, and was equally obscure to the rest of the world. Does this make it a new word as the AND suggests?

Some organisations choose their Word of the Year on the basis of the amount of media attraction a term has attracted during the year.

The original American Dialect Society is like this with the added twist that linguists then decide what they think was (is?) original or interesting. A word can have media attention and yet not be new. Misogyny was a case in point. Macquarie did add a new definition in 2012, but really we should have had that definition in years ago. In the same way, I would argue that shirtfronting is not a new word and we should have covered the figurative use some time ago.

Macquarie is different – we make our Word of the Year selection from words that have entered the dictionary during the year because they are new items in Australian English. So shirtfronting doesn’t qualify, despite the media hype.