Susan on ABC Local talking about her adventures in English 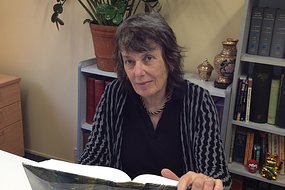 Susan Butler has the last word on our words

Susan Butler is the editor of the Macquarie Dictionary. She's been in the job for more than 30 years after first staring as a research assistant in 1970, when the idea for Australia's first dictionary was born.

The first edition of the Macquarie landed on Susan Butler's desk in 1981 and there was a lot riding on the dictionary's success. "Everyone was holding their breath", says Butler. At a party, Susan Butler pulled out the first edition to test it out. "People started a party game of, think of a word that ought be in the dictionary and check to see if it's there," says Butler. "After the dictionary had come up trumps a number of times I relaxed and got into it, and it all felt good, as if this was how it was supposed to be. This was how the dictionary was supposed to work for us. And people were obviously enjoying finding their words."

Decades later Susan Butler is in the process of preparing the 6th edition of the Macquarie Dictionary and she's keeping an eye on new words through the media, Macquarie's on-line page and her regular callers to the office.

Susan Butler discusses her adventures in English with Richard Aedy.