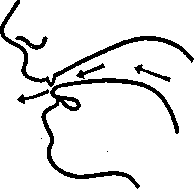 It is not uncommon to find that there is a word that you have encountered in your reading but never heard said.  We fill the void in our head with a pronunciation that we have made up, based on our understanding of the rules of English spelling and applying our intuitions as to how the word might be said. Sometimes we arrive at a pronunciation which is not the accepted one, a fact of which we often remain blissfully unaware until we are found out, sometimes in embarrassing circumstances.

People have offered muyz-uhld for misled and seeg for segue. Julia Gillard got into trouble with hyper-bowl instead of huy-per-buh-lee for hyperbole.

Sometimes we get the wrong end of the stick because the pronunciation is a joke and we don’t realise that. Picture-skew (for picturesque) and crudd-ites (for crudités) are two such jokes.

Sometimes it is a change in the speech pattern that filters through all the Englishes, such as the secondary stress appearing in words like ceremony – from serra-muh-nee to serra-moh-nee. Dictionary is now often pronounced dic-shuhn-air-ree.

People in the media are very likely to be caught ‘in flagrante verbo’. They can also be trapped by scripts which have in them words familiar to the writer but not to the reader. One ABC presenter described the nightmare of seeing archipelago coming towards him in the script – relentlessly. He made a brave attempt and then swapped to ‘a group of islands’.

On another occasion a news writer handed him a script in the middle of the news. He intoned in his very best and most serious ABC voice:

The Council last week appointed a part-time dog. The position was filled by Mr Kenny who said that it had been a busy week.

When he emerged, the news writer looked at him strangely and said:  ‘Sorry mate. Wrote it in a hurry. Should have been dog catcher. Missed the “catcher” ’.

Nice story; it's tempting to be a part-time dog.